Doesn’t seem fair to post about Mother’s Day back in May and not post about Father’s Day, does it?

We got the the Hubs some great gifts for Father’s Day- but the best gift we could have given him was letting him sleep in. So that is what we did- until 9:30. Considering my kids get up at 6 am, that is no small feat! We woke him up with his favorite breakfast (2 doughnuts and a coffee from Tim Hortons- we’re nothing if not healthy!) and gave him his gifts. Scorch made him a beautiful key chain in school- one that’s sitting on our keys right now.  And the Bean? Well, the Bean painted a rock for the Hubs to use as a paper weight. She glued these outrageous long-lashed googly eyes on it and carefully put it in a gift bag for him. But when she took the rock out (because my kids never let anyone open their own presents), one of the eyes fell off. Without missing a beat, she told the Hubs the rock was now a pirate rock that had an eye patch instead of an eye. Perfect.

After going to Mass that morning, we went down to the Hub’s grandparents house for a few hours. Grandpa isn’t doing well- he hasn’t bee doing well for quite some time. He stayed in bed and slept most of the time we were there, but that’s ok. He knew we were there and he knows we love him and sometimes that’s the best gift you can give someone.  The kids spent the time Grandpa was awake telling him stories and keeping up the happy kind of commotion only little kids can bring to a house. And seeing Grandpa is good for them. Unfortunately they won’t really have any memories of him in his prime, but they still know that he’ll listen to them and laugh at their stories. And he’s showing them that illness and dying can be done with grace and that it’s not something to fear- a priceless lesson as far as I’m concerned. 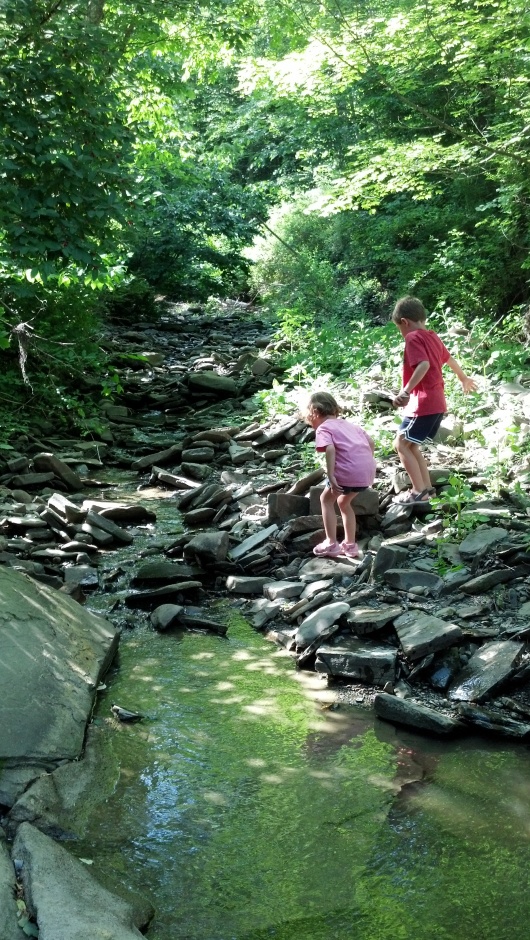 After hiking through the property and getting bit by the bugs, it was time to say our goodbyes and head out to my  parents for a BBQ with my Dad. Have I told you all I have the best dad in the world? Because I do (with the exception of the Hubs, of course). My Dad currently plays tennis competitively a few times a week. Do you want to know why he started playing tennis? Because I started playing tennis and he didn’t know how to play- so he figured he’d better learn so we’d have something to talk about. I haven’t picked up a racket in 10+ years, but my old man is crushing it a few times a week.  He also makes me CDs of some of the new (to him) music he’s found- he’s the reason I started listening to Mumford and Sons a few years back. He’s funny and smart and so damn personable it’s impossible to go anywhere with him without either seeing someone he knows or making a new friend.  He’s the Bean’s best buddy- I think she’s rather hang out with her Papa more then just about anyone in the world.  She’s got good taste.

After our time in the pool and eating my parents food, it was time to head back home to put the kiddos to bed. One the way home, the Hubs called his father.  We don’t see my father-in-law as much as I’d like, but he’s an important part of Father’s Day whether he’s here in person or not. After all, he’s the one who taught the Hubs how to be a father. How to raise his kids with love and kindness and fun, but also with respect. He taught the Hubs the importance of being involved- by coaching and being there for dinners and walking his kids into school. The Hubs is one of the best father’s I know, and he learned that all from his Dad.

When I met the Hubs almost 15 years ago now (!!!!), I knew he’s be a good dad. With some guys, you can just tell. But I didn’t know what kind of dad he’d be. Would he be the strong, silent type? The goofball, buddy dad? The involved dad in the dugout or the dad on the sidelines cheering his kids on?  He’s all of those dads- and more. He’s what he needs to be for our kids in any given situation. He’s not perfect (nor am I)- but he’s got the best quality of all. Love- and lots of it.  My kids may not always like us, they may not always agree with us- but they will always, always know they are loved.  And that makes the Hubs the best kind of dad of all.