The Bean is playing flag football. She said she wanted to play, so we signed her up and then she lost her mind over the fact that we dared to do what she had asked us to do. Needless to say, getting her to her first practice involved a combination of lying (“Coach won’t have a full team if you’re not there- you don’t want to let the other kids down, do you?”) and bribery (hello dinner at Friendly’s!). But we got her there and she loves it. Can’t-wait-to-go, why-can’t-we-play-every-day loves it.

She’s the only girl on the team full of sweet, funny, nice 5 and 6 year old boys. Last week during the game, one of those sweet boy went up to the Hubs and asked completely out of the blue, “Coach, can I date your daughter?”

The look on the Hubs face was priceless. “No, you can’t. Pay attention to the game.” Then, as an after thought,  “Plus, you’re too young.”

That sweet little boy walked away, then came back 2 minutes later and very seriously asked the Hubs if he could date the Bean in 10 years when they are both 16.

I melted and the Hubs had an internal panic attack.

The other day I was with the kids and we stopped by a Catholic school. The kids read the name of the school, written on the building in old fashioned script and promptly informed me that it was a Pinocchio school.

It took a lot of persuading to convince them that, no it wasn’t a Pinocchio school- it was a parochial school. Still not sure they believe me.

We have an Elf on the Shelf, Buddy. Buddy’s been with our family since Scorch was 3 and his return every year after Thanksgiving is a Big Deal in our house. Thankfully Buddy is a lazy elf, so he doesn’t get into trouble or make messes- he just moves from spot to spot every night, finding a new vantage point from which to spy on the kids and narc to Santa.

Except for last night. Last night, Buddy didn’t move. He stayed right where was was because he didn’t want to go to the North Pole to have to tell Santa how rotten the kids were. Instead, he left them a note telling them (nicely) to shape up or face the consequences. I wasn’t sure how my delicate snowflakes were going to take Buddy’s letter this morning- but damned if we didn’t have the most peaceful morning in recent history today.

I’m hoping that elf is feeling verbose and isn’t afraid to drop a stray threat or two as needed the rest of the month!

This morning on the way to the work, I passed a field of cows and sheep. So, as I’m wont to do, I pulled over, hopped out of my car and took some pictures with my phone (all the while cursing the fact that I didn’t bring my good camera today).  As I got closer to fence separating me from them, all the sheep turned tail and ran away. Then they all stopped at pretty much the exact same time and all turned to look at me. The absurdity of the group-think going on cracked me up, so I laughed the whole walk back to my car. 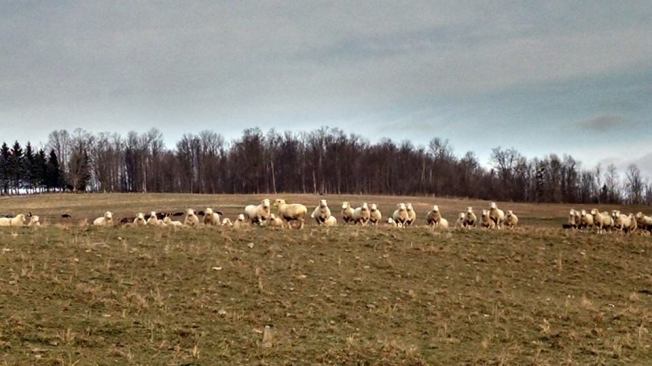 Is it any wonder that I got texts from 3 different people asking if I was OK by the time I got back to the car? Gotta love small towns where everyone driving by knows you and wonders at your sanity.