When Scorch was 3, I shut our van door on his arm.

He and I were going to his swim lessons at a local YWCA. I carefully pulled into the lot, keeping my eyes peeled for kids darting around. I gathered up all our stuff, unbuckled Scorch from his 5-point harness, set him carefully on the ground, and pulled the door shut. In the time it took me to turn around from the van to the sidewalk- Scorch realized he forgot something in the car and reached in to the van to grab it.

The van door (a manual-slide side door), hurling at top speed, slammed into his arm above his wrist and bounced back. I was standing right there- literally not two feet away from him- and I couldn’t not stop it from happening- all all happened so fast. Thank God Scorch’s arm wasn’t broken, but it was severely bruised and we had it x-rayed 3 separate times over the next few months to make sure we didn’t miss a fracture because the swelling was so bad.

When the Bean was 3, I lost her at a playground. It was after a big charity walk and the kids were so very good that I decided to take them to the playground they had been drooling over all morning. There were a lot of people there, so I kept both kids by my side as we explored. At one point, Scorch wanted to go on the swings and the Bean didn’t. So I told her to stay put behind me while I gave her brother a push to get started- he was only 5 and not very good a pumping yet. When I turned around, literally 10 seconds later, she was gone. Thankfully we found her within minutes- she wandered away to check something else out- but I have never been so scared in my life.

I don’t know what happened in Cincinnati yesterday. I have no idea if the child’s mother was on the phone. Distracted by an other child. Simply tying her shoe or looking in her purse. I have no idea what she was doing- but I can almost guarantee she was doing something we’ve all done before. Or maybe she wasn’t doing a damn thing and her kid still managed to get away from her. 3 year olds are quick and quiet when they want to be – and they are pretty easy to lose in a crowd.

It IS a tragedy that a gorgeous, majestic, endangered animal lost its life as a result. Should the zoo have responded different? Been built differently? Had a different safety plan in place? Perhaps- maybe it’s time we revisit the ethics behind zoos and how they are built. But what I seeing online and in the news isn’t about the zoo- it’s an attack on this child’s mother.

Here is what I do know. I know that society expect perfection- and that is an impossible standard. We’re not supposed to be helicopter parents, but if our kids fail, we’re blamed for not being on top of them all the time. I’m supposed to feed my kids organic, free-range, non-processed food all the time, but not really. Because if that is all I do, then I’m too out there and subject to eye rolls from the other moms. I know that I’m supposed to urge my kids to be happy and find themselves- but if they aren’t the top of their class/team/whatever than clearly I’m not doing my job at helping them excel. 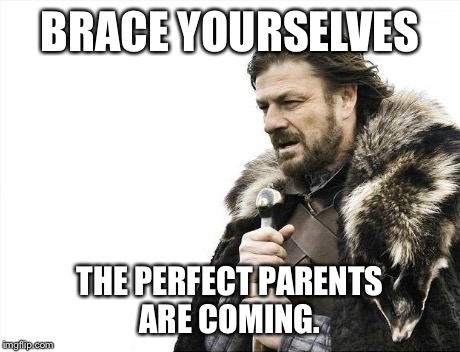