The good news is this winter is going by crazy fast! The bad? It’s been almost a month since I’ve wrote anything here.

Normally winter drags here in the frozen north. I can handle November and December because of the holidays, but mid-January through mid-March are the longest months. The days are short, cold and snowy and my motivation to do anything is at a low—all of which doesn’t help pass the time. But this year I decided to change things up a bit and became a skier.

The first time I skied was middle school when all the kids joined ski club. We’d hop on a bus after school, drive for 35 minutes and then have 3 hours to ski before heading home. It was the most freedom we had had pretty much had ever and I was so excited. But then I realized I hated the snow, was lazy and that enjoying hot chocolate and french fries was much more fun than falling down a mountain, so the total time actually spent skiing that year was probably under an hour.

8 years ago, my brother was running his own ski club at the school he taught at. He needed an other adult to chaperone the kids, so I volunteered. The Bean was 6 months old at the time and I was dying to get out of the house.  I was so desperate that spending hours out in the cold, hurling my body down a mountain seemed like a better alternative than putting a 2 year old and a 6 month old to bed. Shocking no one, I didn’t like skiing any better this time around- especially after I had an epic wipe out that resulted in one of my skis going down the hill without me while people chanted “Go Lady!” at me from the ski lift as I walked down after it.

So, why, you’re wondering, would things be any different this time around? This time, I was actually doing it with my kids. And there isn’t much I wouldn’t do for them. So, for the past 6 Thursdays I’ve been starting all over again and learning how to ski properly. Scorch has been snow boarding for 3 years now, so he’d go off with his ski club buddies while the Bean, having never skied before, took lessons. Since she was not going anywhere without me, I took lessons as well. And- AMAZINGLY- skiing isn’t so scary when you learn how to do it right! (Shocking, I know). 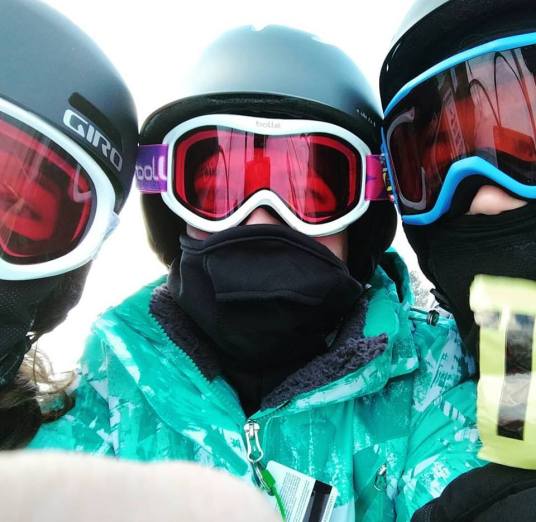 By the start of week 2, Bean and I graduated off the Bunny Hill. That meant for 4 weeks in a row, I got to bomb down the slopes with two of my favorite people. And by bomb,  I mean, they bombed with zero fear. Me? Well, I made really, really, really big s-turns while repeating calming phrases to myself out loud- things like “you’re not going to fall” and “you won’t die” and “if Beyonce can carry twins, you can ski!”.

Thursdays very quickly became all of our favorite night of the week. The Hubs is normally the one who does all the  physical activities with the kids, so it’s been great to have something that is just ours, where I get to be a participant instead of the cheerleader from the sidelines. The Hubs has had 5 major knee surgeries in in the past 25 years, so you couldn’t pay him enough to try to ski.

So here we are in March. Ski season is over and I learned that you’re never too old to try something new. Again. (And when you wipe out—because you will, even invoking Beyonce can’t help that—helmets are a wonderful, wonderful thing.)