When Scorch was in 3rd grade, he started snowboarding. He worked so freaking hard to learn- it took him all 6 weeks in row of weekly 2.5 hour lessons to finally- FINALLY- get his green pass. He hasn’t looked back since. Last year, the Bean and I started skiing. She’s fantastic, I stink- but we are, officially, a family that skis. (Except the Hubs- he wants nothing to do with it thanks to his previous 5 knee surgeries.). We love our Thursday nights on the slopes- Scorch heads off with his friends while the Bean and I stick together and she makes fun of how slow I go. We meet up randomly and then have a fun dinner out. #bonding 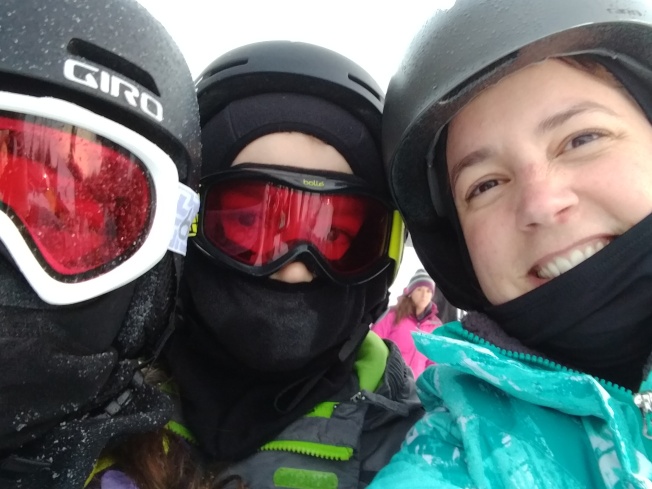 Last week, just as the Bean and I got off the ski lift at the very top of the mountain, I heard my cell phone ring. I ignored it and we continued on with our group lesson, slowing inching our way down the hill with our instructor and 8 other kids. All was going well enough until I got a tap on my shoulder from another chaperone who some how tracked me down to tell me Scorch was hurt and that I needed to go check on him ASAP.

Which was doable – in theory. Except that I was stuck at the top of a trail I didn’t know with my 9 year old who promptly fell over, lost a ski and started to sob that she was never going to get up again. So I called the head chaperone who was with Scorch, determined that no bones were jutting out, EMTs were not called and he was calm – then I more more less told the Bean to calm down, pull herself together and get moving.

15 agonizing minutes later I rushed into the room where Scorch was to find him acting completely fine. Sure, he had ice on his wrist, but there were no tears, swelling or bruising. It was rather anti-climatic after our rush down the hill.

We headed home and had the Hubs (a former EMT) look at Scorch’s wrist where he deemed it fine. We asked Scorch to perform a bunch of mobility exercises, that he did successfully and then basically shrugged our shoulders and figured he was fine.

The next day, the wrist was still sore, and, given that Scorch had a basketball game and two football games the next day, we decided to get him x-rayed just in case. The doctor we saw agreed that it was probably nothing but ordered the x-ray just in case.

You know, just in case his wrist was broken in two places. Which it was.

Scorch handled this rather well all weekend long – until Monday when the cast was put on and reality set in. That night, my sweet, patient, loving child lost his ever loving mind as we drove to the gym (something we so every Monday, Wednesday and Friday so the Hubs and I can work out). There were tears, yelling, stomping of feet- and then finally, after getting the Bean all riled up – The List.

My kiddos spent the last 15 minutes of our drive to the gym outlining all the things that I don’t let them do that I should: 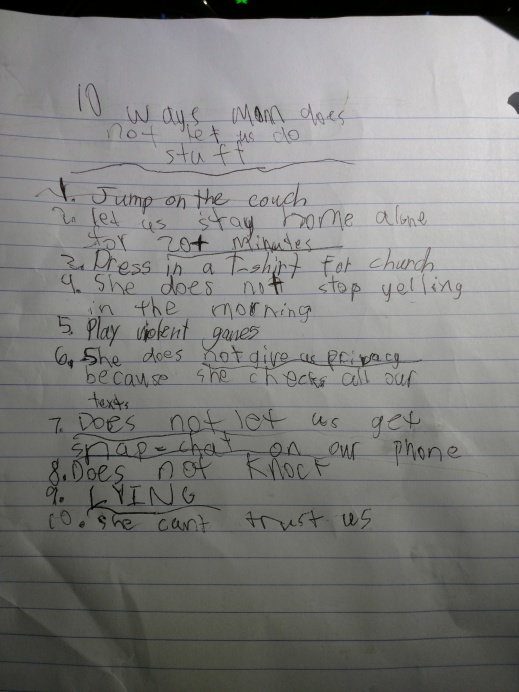 For the record, I defending myself against the “lying” accusation by noting that telling my kids that they can do something, only to find out what they wanted to do wasn’t offered at the time they wanted to do it (something out of my control) was not lying (that happened the week before). I also told them I’d stopped yelling in the morning (why do I yell? So we get to school on time. I didn’t yell yesterday once, we were 20 minutes late). The rest? Well, they’d just have to suck that up- that’s called parenting.

Bottom line: Scorch is in a cast for the next 3 weeks, he’s a resentful mess over it and I’m wondering how much a kid with a broken wrist would get me if I sold him to the circus.